Navigation
You are here: Home / Archives for Produce Index 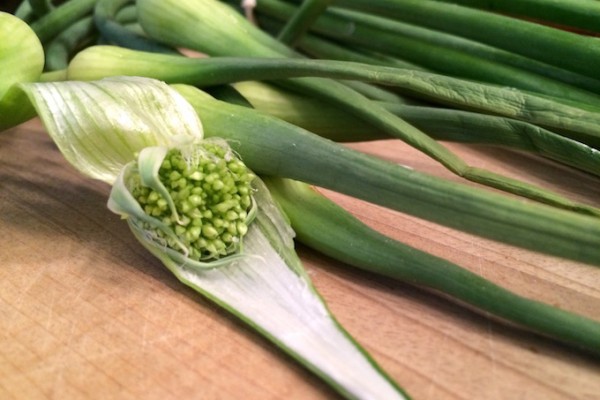 In late June at the Farmer’s Market you might find some fascinating hard green stocks with a closed flower at the end … they are garlic scapes! They are the flower bud of the garlic plant and are removed to encourages growth of the bulb. Depending on the variety the stems might or might not be able to eat.  In the variety pictured above, the stems are extremely hard and would not be good for eating.  The most edible part is the flower bud, which is exposed once the “petals” are peeled back.  The florets can be cut off and used just like minced garlic.  They are less potent than a bulb of garlic, so you will need to use more than the more amount in a recipe. Garlic scapes can in stored in the refrigerator for up to 2 weeks or on the counter for a few days. 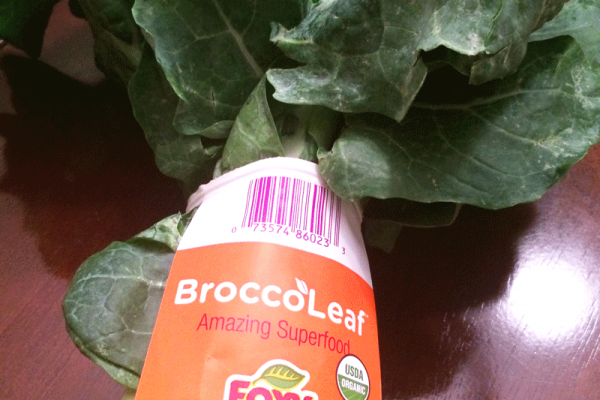 A few months ago I wrote a post about BroccoLeaf, a revitalized organic super food by Foxy Produce​. And I am so excited that I just found it in the grocery store!  After purchasing it, I immediately went home to put it to the taste test.  The results…

It is EXTREMELY bitter.  The most bitter leafy green that I have ever tasted… but I knew that it was good for me so I proceeded to try to take away some of the bitterness. Overall, I will definitely be purchasing BroccoLeaf again, but you won’t find me eating it like a salad.  Even though some of the nutrients might die off from the high heat sauté cooking, the end taste was worth it.  If you come over for dinner you might find this new super food on your plate! Potatoes are a member of the nightshade family.  The potato is a perennial plant, but we usually harvest it as an annual to eat the fibrous tuber roots. There are over four thousand varieties, ranging from purple to yellow and starch to waxy.  Here is a breakdown of the different types of potatoes:

WHERE DOES IT GROW?

Potatoes are grown in the ground.  They are considered the root of the plant. Potatoes originally came from the Andean region of South America and brought over to Europe.  They were introduced to the United States in 1719 by Irish immigrants. Today potatoes are grown throughout the US and are the 4th most important crop.

HOW TO EAT IT?

Potatoes should always be cooked before eating.  They are extremely versatile.  They can be boiled, simmered, steamed, baked, roasted, sautéed, grilled, deep-fried, or microwaved. Most of the nutrients are in the skin, so it is best to use them unpeeled if possible.  If you do peel them, the flesh will turn brown due to the oxygen, so drop them in a bowl of water.

Select firm potatoes with no sprouts or blemishes.  Potatoes should be stores in a cool, dark place, with good air circulation.  Do not refrigerate or keep them in plastic bags as this leads to softening and sprouting.  If potatoes are stored at 50 degrees they will keep for 2-3 months.

When peeling potatoes, any area of green should be peeled completely away, as these patches contain solanine, a naturally occurring poisonous alkaloid that intensifies with light exposure. Parsnips are very similar to the carrots, except they are white and slightly sweeter.  They are best harvested after the first frost in the fall, when their starches turn to sugars. Parsnips are always sold without their green tops, as they can cause a skin rash due to their toxic sap.

Parsnips were originally grown wild in Europe and western Asia. They were a staple food for the lower class.

They can be eaten just like a carrot.  Wash, peel, and then enjoy either raw or cooked.  Do not eat the toxic green tops or stem.

Select a parsnip that has its greens removed and that does not have new growth.  It should be firm and slightly heavy for its size. Store in the refrigerator for up to 2 weeks. 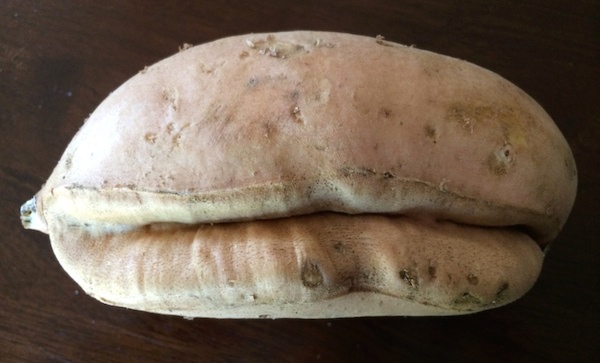 Jicama is a large dense root vegetable that is hard and heavy. It is generally round in shape, although like the above picture above it can also have a unique form. The outside is a pale tan color where as the inside is white. Jicama has a moist, crunchy texture.  It is slightly sweet and nutty.  Jicama is also known as a yam bean, Mexican potato, or potato bean. All parts of the Jicama plant are poisonous except for the root.

It grows wildly in Mexico and Central American and was consumed by the Mayan and Aztec tribes.

Jicama can be eaten raw or cooked, once the skin is removed.  To help preserve the white flesh color, sprinkle with an acid such as lemon, lime, or vinegar.

Jicama can be stored in a cool dark place or in the refrigerator for 2-3 weeks.  It prefers to have air circulate around it, so keep it uncovered.  However, if it has been cut, wrap the cut portion in plastic wrap for up to 1 week. 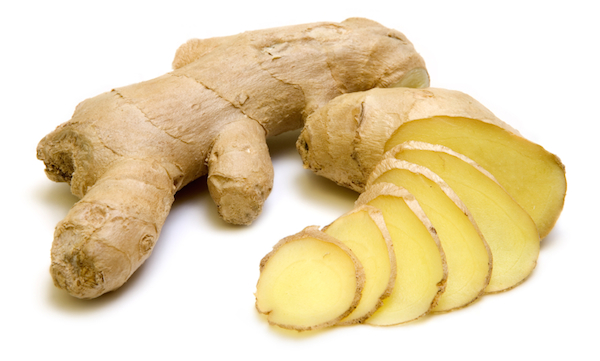 Ginger is the root of the ginger plant.  It is classified as a rhizome, which is unique because if it is separated into pieces, each piece will be able to produce a new plant (known as vegetative reproduction).  Although ginger is most commonly used as a spice, it is still considered a vegetable. It is very high in potassium, but the small quantities used in meals limits its nutritional value.

Today China and India are the top producers of ginger root.  It is also available from Hawaii from December through early Spring.  To harvest ginger the entire plant must be pulled up, just like a carrot.

Young ginger can be used with the skin on, however more mature ginger should have the tough skin peeled.  It is most commonly minced for use as a spice in meals.

Ginger is best stored wrapped in a paper towel, placed in an unsealed plastic bag and then stored in the refrigerator for 3-4 weeks.

When purchasing ginger root at the grocery store, it is perfectly acceptable to break off a small portion for purchase.  You are not required to purchase the entire root. 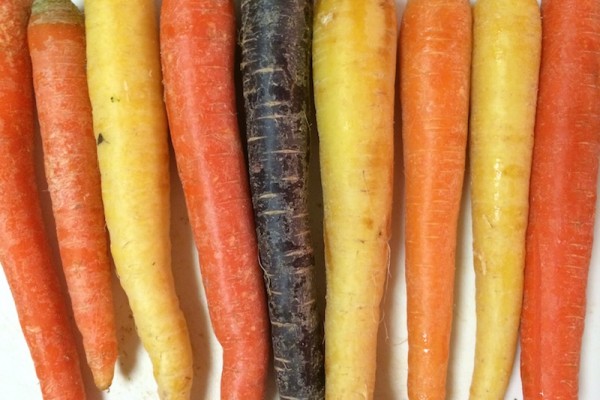 Carrots are considered a biennial plant in the umbellifer family and they are part of the root family, more specifically the taproot. The carrots can be found in a wide variety of colors, such as orange, yellow, white, and purple.

Carrots are grown in the ground.  They are considered the root of the plant. The leafy greens that grown above ground can be eaten as well as the beet itself.

Today, carrots are grown around the world, but it is said that they originated from Afghanistan and were originally only purple in color.

How to eat carrots?

Carrots may or may not be peeled before eating. They can also be eaten  steamed, cooked in water or raw.

How to Select & Storage Carrots?

Carrots are considered a winter vegetable, although you can find them all year round.

To store carrots remove their greens, so they don’t continue pulling out the nutrients from the root.  The greens can be stored separately for use later up to a few days. Carrots on the other hand, will store in the refrigerator for 3-4 weeks.

Carrots contain high amounts of vitamin A, which is why they are known for improving eyesight. But also deliver a great source of vitamin K and vitamin B6.

Science has shown that when eaten raw our bodies only absorb 10% of the nutrient, but when cooked we absorb about 29%.

Note: Steaming carrots is a much better and healthier option as it keeps all the nutrients your body needs. 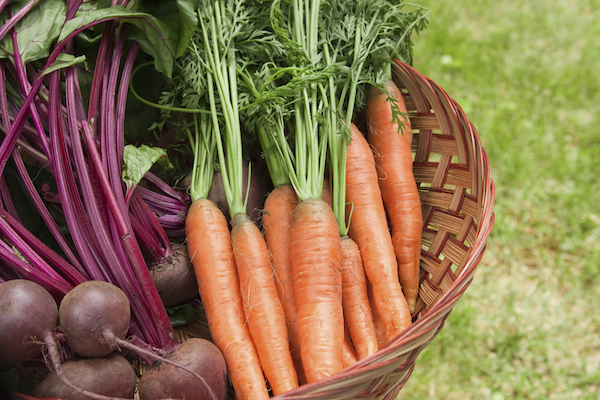 Root vegetables have been staple items in kitchens over the years due to their low cost, nutritious value, accessibility and they store well.  There is a large world of root vegetables to explore beyond the carrot, potato, onion, and beet.  Though they might not be the most attractive item in the grocery store they are worth bringing to the kitchen table.  I love these underground treasures because they are hearty and can be used in place of carbohydrate such as pasta and rice. My favorite way to eat root veggies is by roasting them!

When shopping for root vegetables look for ones that are heavy for their size and are firm.  Do not buy if they are shriveled, bruised, or have any tender spots.  They are best stored in a cool, dark area. They usually last for around two weeks. They are considered a winter vegetable, though you can usually find them in the grocery store year round.

Roots are best described as vegetables that have fleshy edible underground parts. If we let them grow they would provide nourishment to the plant in order for the plant to survive.  Root vegetables can also be thought of as storage organs enlarged to hold energy in the form of carbohydrates. There are three main types of roots: true roots (which include taproots and tuberous roots), modified plant stems (which include rhizomes, corms, and stem tubers), and bulbs.

We are most familiar with these as they are the main part of the plant that absorbs nutrients and moisture as it grows vertically downward. Examples of taproots include:

These are enlarged modified lateral roots that function as storage organs. Examples of tuberous roots include:

Also known as creeping rootstocks. It is a fleshy horizontal plant stem that spreads below the soil surface and forms leaves above and thin roots below. If a rhizome is separated into pieces, each piece would be able to produce a new plant, which is known as vegetable reproduction. Examples of rhizomes include:

Is a short, swollen underground or underwater plant stem whose inner structure is made up of solid tissue. Corms differ from bulbs in that they have a solid interior, where bulbs are made up of individual layers. Examples of corms include:

This is a swollen underground storage organ that forms from a thickened rhizome.  The top and/or sides of the tuber produce shoots that grow into stems and leaves, while the underside produces roots. Tubers are known for storing large amounts of starch. Examples of stem tubers include:

A bulb is a short stem with fleshy leaves that function as food storage organs during dormancy. Examples of bulbs include: